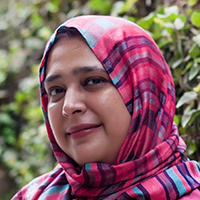 I was born in Asia, in a country called Pakistan. I grew up calling myself Pakistani, as well as Asian. As a young girl, I received a global education, learning not just about my home land but also about other countries, especially Asian nations.

Growing up, I learned that Pakistan has a very unique symbolic place in Asia. It’s surrounded by India, China, Afghanistan and Iran… all different portraits of Asia, a variety of cultures and ethnicities. A myriad of peoples. Just like Asia itself. I always considered myself among these people, like a group of friends who were distinct yet tightly knit together.

Fast forward 20 years and I emigrated to the U.S. That’s when I discovered that while Asia consists of 48 countries, Americans don’t always know this or care. Further, Asian American doesn’t often mean people from all 48 of those backgrounds. For many, Asian American actually means East Asian American, and not Indian, Pakistani, Middle Eastern or the like. A recent Time article explains the history behind how the term Asian American was coined during the civil rights era, and grew to mean a few select countries from Asia who were the majority at that time: East Asians.

Some will argue that labels don’t matter. I disagree. Labels are important for a number of reasons, specifically as they relate to young readers. After all, accuracy and authenticity are both part of representation, and if we cannot correctly define the heritage of our readers, how can we ensure that the rest of their representation is correct? If we count certain reader populations as Asian, but not others who fall by right in that definition, what message are we giving to those left out?

As anyone can see, there are many questions and considerations about what it means to be Asian, but most of them come from those outside the Asian community. This, then, is the biggest question in front of us during Asian American and Pacific Islander (AAPI) Heritage Month: when gatekeepers and educators are discussing issues of Asian representation, will they include those who are Pakistani, Arab, or Persian?

What I’m describing isn’t just an academic discussion. It has real world consequences for people of all ages. I can recall many occasions when my family needed to fill out a form—at the doctor’s office, for school admissions, for the Census—and left the question about race blank because “nobody knows we’re Asian too.” Imagine a school that wishes to know how many Asian students it serves, but half of those students don’t get counted. Such issues lead to problems in allocating resources or reporting errors. They also leave a mark on the self-esteem of any young person who feels that nobody in power sees them, or knows they exist.

Whether we’re authors, parents, educators, or politicians, we don’t want this. We want all our children to feel welcome and part of the diverse community they live in. We want them to know that we see them, know who they are, and what identities they possess.

So here are some easy ways to make sure we model accurate representation for young readers during AAPI Month:

So this AAPI, please find a variety of books and authors to explore for yourself and your students. They will not only shatter stereotypes but also lead to great discussions in the home and classroom.